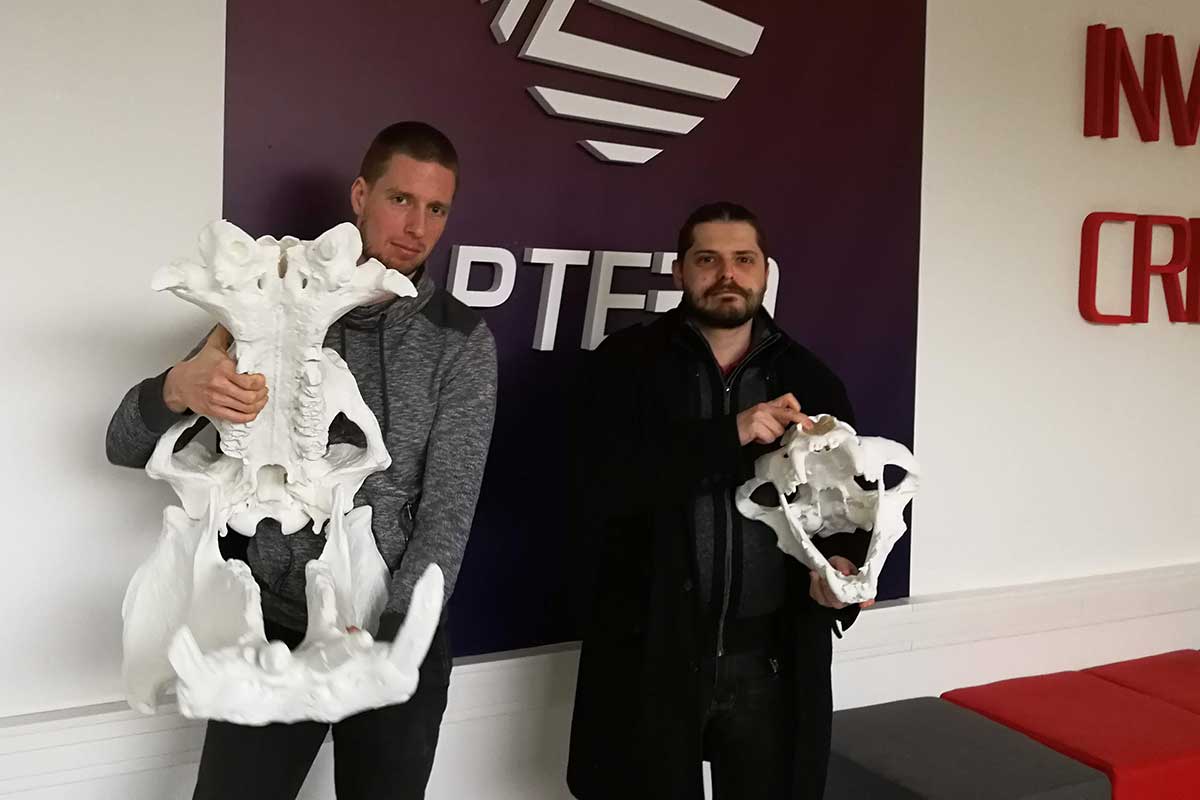 Today, the anatomical features of the various species housed in the City Zoo of Pécs are explained to children through the use of of exotic animal bones, such as a a hippopotamus or tiger skull, snake skeleton, sea bass and many other specialties. Each specimen is free to hold, explore, and the biggest one is light enough for all these actions. And if one is accidentally damaged, a replacement can easily and quickly be reprinted.

Recently, the BBC has announced a new initiative at the London Zoo, which makes animal x-rays available to attendees, extending beyond the presentation of the work of veterinary surgeons, and primarily intended for general educational purposes.

Here, in Pecs, officials have stretched their imagination far beyond the London Zoo, resulting in the dimensional printing of animal bones in association with the staff of the 3D Print Technology Center of the University of Pécs (PTE).

"We were awarded the contract, of which was orginally solicited to participating entities throughout the region and hosted on behalf of the CIty Zoo, Pécs, and the preparation was an exciting task from a professional point of view, since we were in a ”terra incognita” in many areas," admits Laszlo Szaloki, Project Manager of the PTE 3D Center. “We needed real teamwork within PTE, and we took advantage in seeking the support from many individuals, and avoided limiting ourselves to those currently employed in the 3D center. For example, do you know what a 3D teething of a hippopotamus really looks like? Today we know. The expenses had to be accurately estimated, which was also not an easy task, and it required intensive follow-up to determine what kind of task we actually had accomplished. We had to know how large the workpieces will be, i.e., how much material and time will be needed, not to mention digitization, planning, printing supervision, and post-production work. ”

No Animals Were Harmed During this Project

The actual work regarding the  various pieces was originally initiated by Viktor Potari, and later followed by Bence Mánfai and Tamás Bulsz, who eventually took over the task. "Not one single animal was harmed during the project," explains Tamás Bulsz. ”W we worked with bones, and animal remains, not living animals. The collection of the samples was an interesting topic in itself, since they originated from manydifferent places. The Natural History Museum, the Tropicarium, and several zoos all generously sent original bones or remains.”

As of yet and to the knowledge of the staff in association with the 3D Print Technology Center, there has not been a similar project in Hungary. “I had to solve challenging problems in every respect, however, I can't report any difficulties since the individual steps of the technology are fairly well known. From the 3D scanning (imaging) through the creation of printable 3D models, the steps of the process are customary, up until printing, and we only have to properly apply them for this non-standard task. Most of the time was spent towards creating the actual 3D models. Following digitization, the scanned files had to be "cleaned up" and segmented, taking into account the anatomical features. In particular, the dimensions (very small or very large) and unusual anatomical structures – since we are far more familiar with human anatomy - caused some headaches,” summarizes Bence Mánfai.

The largest workpiece was the hippo skull, which is more than sixty centimeters long and forty centimeters wide. The 3D model had to be ”sliced” into segments according to the capabilities of the printers, bearing in mind they will be glued together later in the future. In regards to the smaller ones, the main problem was the likelihood smaller parts will be too fragile, as they were designed for illustrative purposes, i.e., they later will be handled by children. 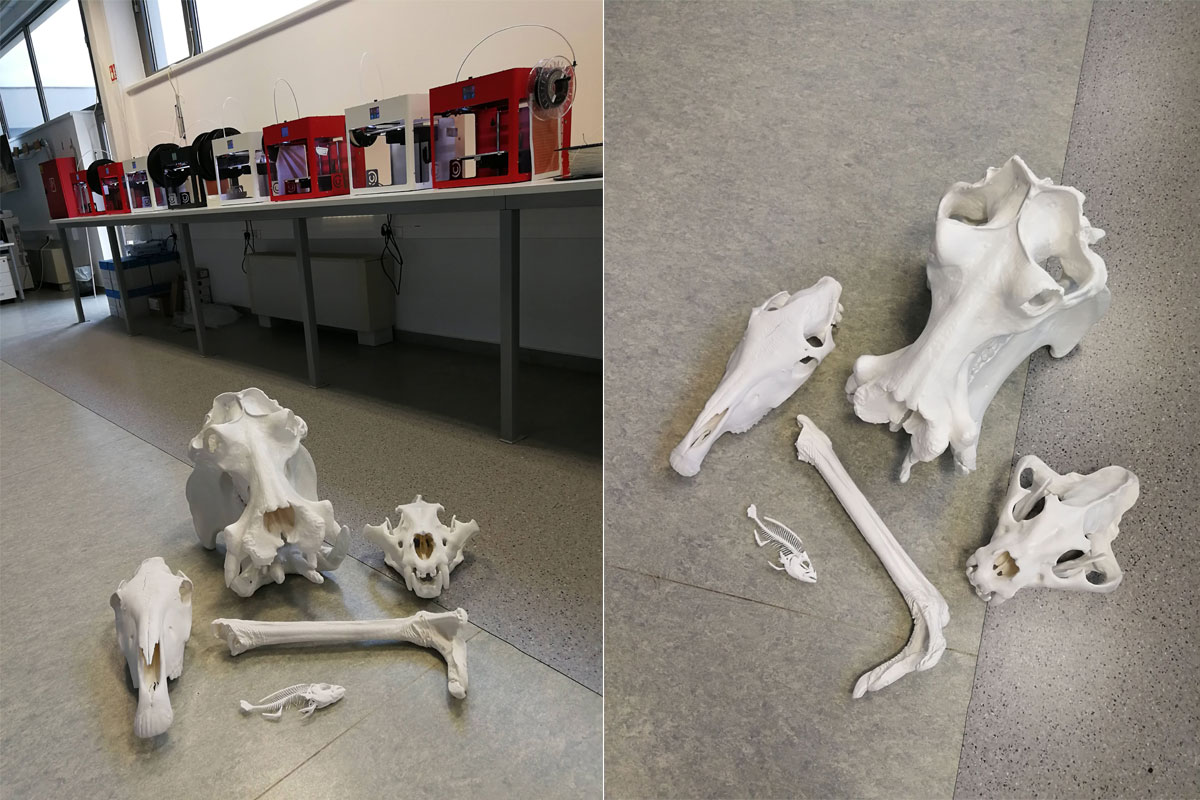 An important feature of the printed "bones" is emphasized in their physical weight, since they are considerably lighter than the original, thus, in reference to the hippo's skull, the weight of the printed version is only one-third of the original. A single person can move, rotate, and comfortably lift the skull, unlike the original. They have also made experiments using the material of the subject, trying to determine the best compromise between durability and weight. Precision was also a very important factor in the modeling phase. Although the staff of the center are accustomed to this, special demands have also emerged, such as the particularly vivid reproduction of teeth, as students are presented with the features of different teeth regarding these models. The creators of 3D models have committted immense time and effort towards enhancing characteristics, such as teeth, lending authenticity to the end product.

The staff of the center used two printing technologies. FDM (filament) was chosen for the larger models, and SLS (Selective Laser Sintering) printing for the smaller, yet more detailed workpieces. The resolution was two and three tenths millimeters per layer, dependent upon the level of detail required. During the post-production process, the main task was to remove the visible joints, smooth out the rougher surfaces, and eventually paint the models characteristically using hues ensuring a high level of realism and naturalness.

In spite of astonishing lifelike replicas, archaeologists of the future will likely easily avert confusing the printed hippopotamus bones with the later physical remains of the two hyppos, Ágnes and Ágnes, who currently reside at the City Zoo in Pécs.

"There is still little experience concerning durability, however, the applied polyethylic acid (PLA) base material will eventually break down after a while, so we are not expected to cause a breakthrough for tomorrow’s archaeologists," states Tamás Bulsz, laughing. “However, I predict a span of 20-25 years of lifetime. Twenty years later, it will be worthwhile to continue this conversation, and I can tell you exactly how the skulls absorb the stress and the passing of time. ”

It will probably be possible to refine the technology, as the City Zoo expressively are satisfied with the "bones”, thus far, and the possibility of future cooperation has already been discussed.