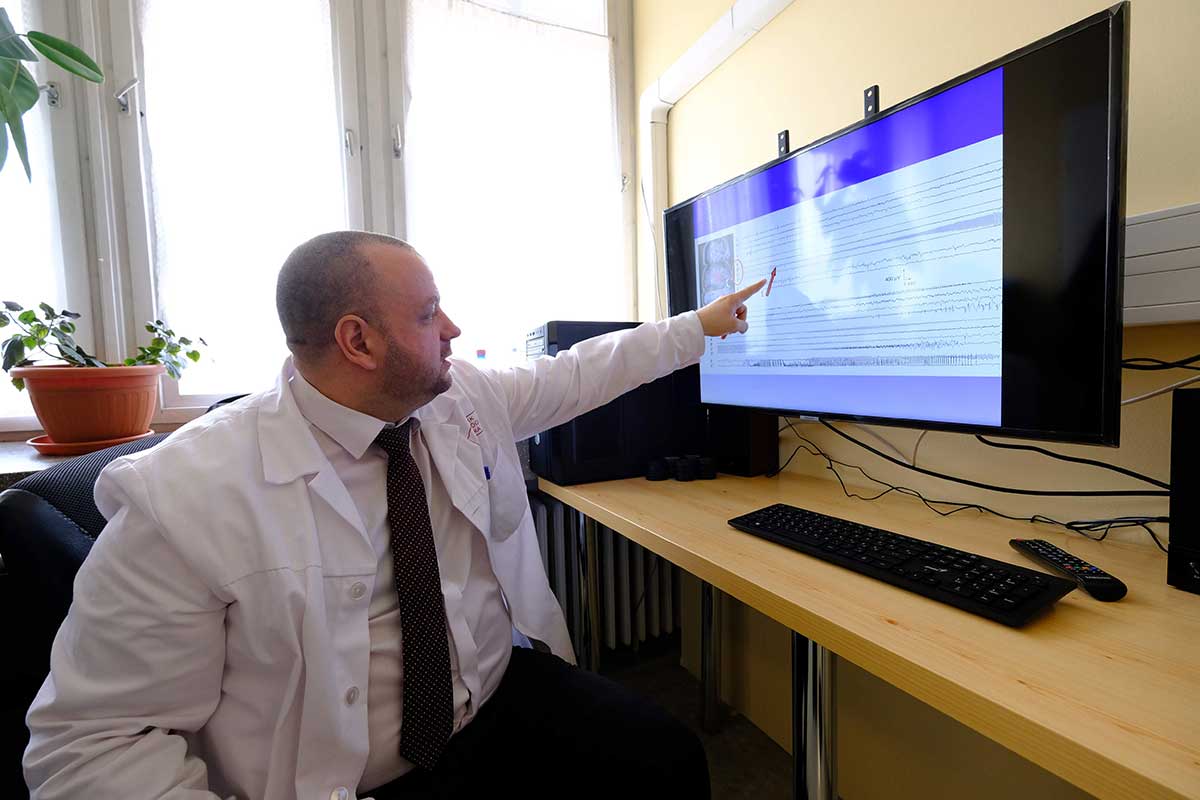 A newly emerging form of treatment involves the use of a deep electrode test, first introduced in Hungary at the University of Pécs, promises new hope for at least a thousand patients suffering from an incurable form of epilepsy. Recent developments now paves a direction in determing the location of the veiled epileptic nodule. The Neurorehabilitation and Human-Machine Connection Research Center at the University of Pécs, recently hosted the grand opening of their sparkling new EEG facility, which meets the technical requirements of the “Lyon Agreement”, originally supported by the GINOP-2.3.3-15 contract.

A series of newly installed monitors and instruments silently await the first round of patients admitted to the EEG Laboratory of the Epileptology Center video at the Neurological Clinic of the University of Pécs (PTE). A few years ago, such a high-tech facility would have been more likely the script of a science-fiction film, as it offers no less than 24-hour real-time observation of brain activity regarding the patients admitted here, using EEG (iEEG), an intracranial electrode placed inside the skull.

The central area of the lab is an ultra-high resolution monitor covering half of a wall, in which Dr. Márton Tóth observes the development of epileptic seizures with enormous detail. Special knowledge is deemed necessary to decipher and find the epileptic foci which are often concealed from the conventional diagnostic methods. Following this procedure, those epileptic focis which were pinpointed are removed by the surgeons aligned to the Neurosurgery Clinic, resulting in effectively healing a dreaded, stigmatizing disease. Admittedly, there is a long way to go towards improving patients quality of life and comprehensively training medical staff seeking to heal them.

"Morbus Sacer": The Sacred Disease, or the Curse of the Gods

It is worth starting with the basics. Epilepsy is caused by a defective area of the brain, the commonly referred to epileptic foci. This area triggers attacks by an increased discharge of nerve cells, causing a "system shock". Repetition is an important condition of the disease, as there may be other kinds of epileptic seizures which are caused by an external effect (such as a stroboscope) or a serious illness, and fortunately, are not permanent. The epilepsy-causing foci occur for a variety of reasons, some of them are genetically inherited or caused by developmental disorder. Additionally, epilepsy can develop any time leading to permanent lesions due to major accidents and illnesses.

Approximately one percent of the world's population, nearly 100,000 individuals throughout Hungary, are currently suffering from the disease, which can cause enormous damage with immediate consequences, often resulting in serious injuries and in extreme cases, cardiac arrest. "It is difficult to say the exact number of patients since epilepsy is a daily stigma, which is often concealed by sufferers and their families, because patients are often stigmatized by society," says Dr. Tóth, who specializes in the treatment of illness. He also informed us, in which those afflicted with epilepsy, the rate of depression and suicide is 25 times more frequent.

The good news is in consideration of today's traditional methods, 60-70 percent of patients treated result in symptom-free by medication, and a good portion of the remaining patients, nearly 3,000 to 6,000 in Hungary, undergo treatment in which the foci are surgically removed. The sad news is the number of epileptic patients remains largely unchanged. For some yet unknown reason, the epileptic foci in an increase among patients undergoing conventional diagnostic methods, primarily skull MRI and PET, including an EEG on the skull, are unable to identify. However, the new intracranial EEG offers help in these situations.

There are many types of epilepsy, generally dependent upon the location of the foci within the brain and corresponds to the various causes of seizure. One type is the commonly known drug-resistant variety, which develops as a result of fever spasms during childhood, in which the focal point of the disease is relatively easy to find and remove. Over the past decade, however, epileptologists around the world have found increasing numbers of cases in which the developmental disorders leading to epilepsy are non-detectable using the conventional MRI.

The evolution of medical technology and the ever-increasing demand has led to the development of the iEEG, which monitors brain function and the course of seizures through real-time, offering enormous detail through the electrodes placed inside the skull. The trained physician is able to locate the focis, which are normally hidden in the conventional MRI and PET examinations, and then can be surgically removed. At present, there are at least a thousand patients throughout Hungary who cannot be reliably diagnosed using conventional methods, however, in consideration of the iEEG, there is a relatively good chance (70-75%) of detection, surgical extraction and recovery.

Admittedly, the method appears simple and as of yet, requires a significant amount of professional knowledge and extremely sophisticated instrumentation, since apart from placing electrodes within the patient's skull, the entire procedure requires several days, even up to weeks, to effectively study the nature of seizures. Paradoxically, the greater the seizure frequency represents an advantage regarding the patient.

Distinctly, intervention can only be implemented within specialized epilepsy treatment centers, of which, there are only two currently operational in Hungary, one in Budapest and one in Pécs. One of the former often-referred to subdural forms of the procedure was first performed at the National Institute of Clinical Neuroscience (OKITI). In the case of subdural iEEG, a portion of the skull is first removed, and electrodes are placed directly upon the surface of the brain.

Dr. Márton Tóth, brought home the commonly-known stereotaxic EEG (SEEG) from Lyon, France, one of Europe's leading epileptic centers, following an intensive half-year study mission. This method first begins with miniscule holes (less than one millimeter in diameter) drilled on one or two sides of the skull, in which electrodes are inserted deep into the brain.

SEEG has far fewer complications, it is less painful and heals much faster, yet requires tremendous expertise and precision, in reference to the user. The skilled neurologist strategizes the intended position of the electrodes after lengthy consideration, which is then followed by several hours of intense surgical procedures, during which the prepared neurosurgeon positions the electrodes. A deep trust among the neurosurgeon and the neurologist is essential towards assuring success. Dr. Márton Tóth remarks, “In addition to a good working relationship, you also need to have a friendly relationship in which the complex and very sensitive interventions can smoothly proceed. The basis of the surgical procedure is not complicated, it can be compared to a biopsy (taking a tissue sample from the brain using a needle). The challenge is primarily to get in touch with the brain at various points and to ensure we do not unintendedly inflict damage in critical areas such as brain vessels. All this requires intensive and long-term concentration, since such an operation requires up to six to seven hours,” says Dr. Zsolt Horváth, who made the first SEEG surgery in Pécs.

Journey into the Brain

In addition to the human factor, technology is also very important. For information regarding the brain and nervous system, neurosurgeons use often-referred to neuron navigational systems, which, as Dr. András Büki, Director of the Neurosurgery Clinic of PTE, function very much like the navigation system of a new car, ‘only’ the road network is the human brain.”

The "map" of the brain is made by high-resolution MR images. During intervention, the medical team knows on this basis of which area they are in pursuit of and thus they can avoid damaging critical brain tissues. There are, of course, difficulties encountered. In contrast to the largely static road network, the brain recalculates itself during the intervention, such as the removal of a tumor, and the map falls apart. All this should be corrected during surgery.

The insertion of deep electrodes requires tremendous precision, literally tenths of a millimeter, yet, as Dr. András Büki emphasizes, “It is inherent and synonomous to the task at hand.” The neuronal navigation system used in SEEG procedures was procured and is valued at or nearly 300 million HUF, and was financed by a GINOP application. Reportedly, it is one of the most advanced systems throughout the entire Central and Eastern European region.

The first successful surgery was carried out on a young patient culminating in various results from different imaging studies regarding the precise location of the foci. Dr. Márton Tóth emphasizes, “In this case, it was not an exaggeration to use the term "fate", since a female patient, in her twenties, was suffering from continuous night seizures. The possibility of the patient ever becoming pregnant was contingent on the success of the procedure.”

Since the traditional EEG, MRI and PET examinations in reference to the skull had varied  results, only the deep electrode examination was able to answer the exact question of where the foci responsible for the seizures was located. The intervention was carried out with the help of French doctors and revealed new dimensions regarding the human brain.

“We could see exactly how the seizure starts and then spreads from brain to brain area. By doing so, we have been able to determine exactly where and how much area should be removed.” Today, the patient is remarkably free from seizures. 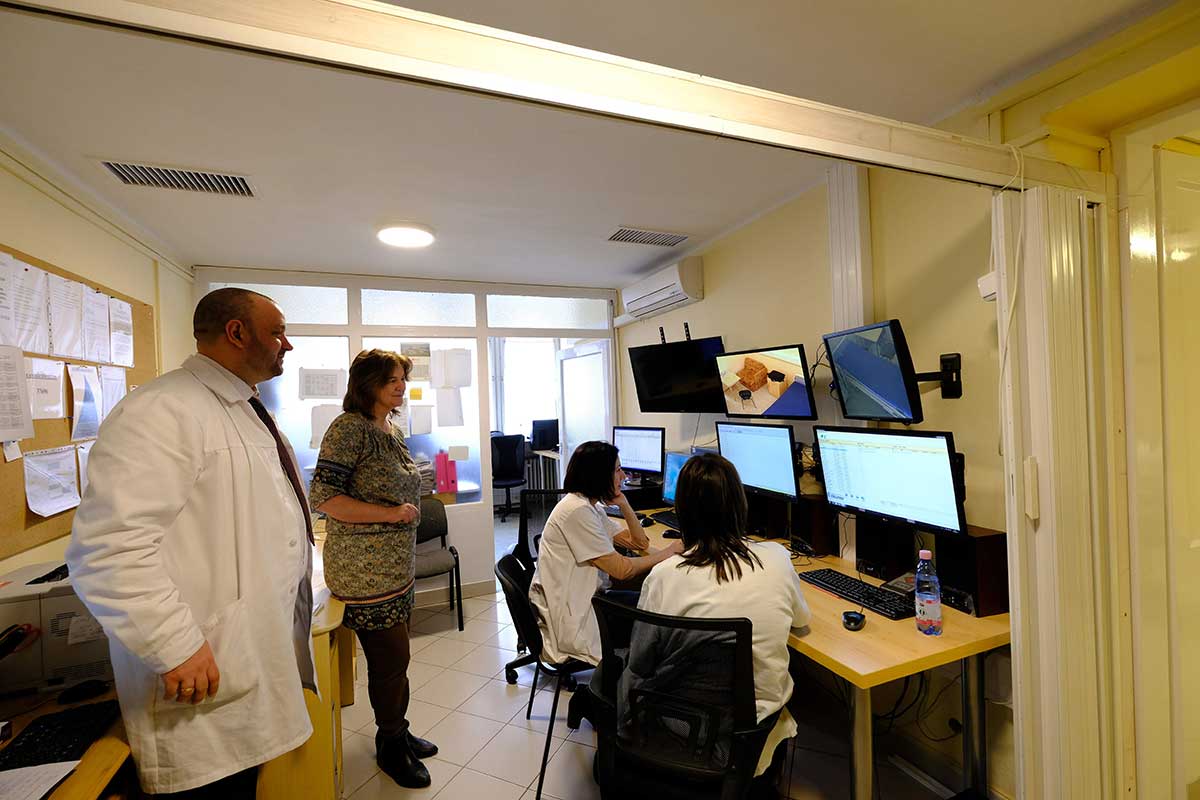 The goal now is to ensure SEEG operations and tests are sustainable and to introduce them throughout Hungary. The cost of the first intervention was nearly eight million forints and financed by the PTE Chancellery. Preparations for further surgeries are already underway, yet adequate funding is essential in support of those patients waiting, and a detailed cost-effectiveness analysis has been carried out by the PTE's Health Technology Assessment Center.

“When applying for a new type of intervention, it must be substantiated in which the cost, or financial burden is not unbearably high, and in going forth with the procedure, patients within reason, can expect some increase in the quality of life and their life expectancy. The analysis of the existing data revealed the life expectancy of epileptic patients will be significantly longer with the SEEG (6-7 years more) and their quality of life will undergo significant improvement, at relatively low costs. In quantification, this means we can provide the patient with a full-quality life span at the expense of nearly one and a half million forints, which is far below the 9 million cost limit prescribed by law,” states Dr. Antal Zemplényi, Head of the Health Technology Assessment Center.

The calculation was also confirmed by the national professional organizations, and the application for funding is awaiting ministerial judgement. In the event of a favorable evaluation, a total of 48 interventions will be carried out annually, and performed in the two Hungarian centers. "A genuine innovation is a social benefit, and the introduction of SEEG throughout Hungary can be a model in this respect," offers Dr. Tamás Dóczi, Academician, Head of the Clinical Research Pillar of the National Brain Research Program. "Of course, there will be no Nobel Prize, yet we can help thousands of untreatable patients thus far, and this is real medical innovation."